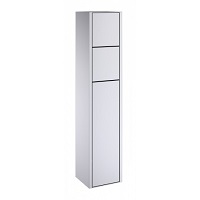 Emco bathroom furniture always adapts to your bathroom situation and your style. Thanks to their modular design, different colors, dimensions and technically functional innovations, they change rooms and thus create completely new ones. Above all, a first-class selection of materials, a qualitative workmanship and a high-quality design are in the focus of the German sanitary ware manufacturer. Convince yourself of Emco Asis toilet modules, storage modules, cosmetic modules, and waste boxes, which are equipped with an intelligent drawer layout and not only make everyday life easier in the morning dressing, but also bring order and design in your bathroom. Or how about the practical Emco Asis 150, Asis 300 and Asis 2.0 toilet modules, in which unsightly rubbish, the used toilet brush and toilet paper elegantly disappear in the wall behind the module and are always accessible when needed?