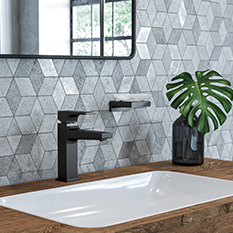 AXOR taps follow the demand for perfection. AXOR is continuously developing, designing and manufacturing taps brought to perfection. Thus AXOR stands for the symbiosis of design and function. In order to meet this demand, AXOR develops taps that are unique and extravagant, such as the AXOR Starck V tap or the AXOR Carlton tap.