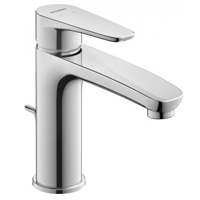 Duravit taps promise functionality and a modern design in perfection. Whether you are looking for a wash basin, shower or bath mixer, the ease of use and the understated elegance of Duravit taps will not disappoint. Each Duravit wash basin tap is available in different sizes and is equipped with an adjustable aerator with tilt function, which prevents water splashes. You can choose between surface-mounted and concealed taps for shower and bathtub taps. An additional icing on the cake: all Duravit B.1 thermostats have an integrated scalding protection, which protects against hot water. The Duravit taps are rounded off by the Duravit Blubox with and without pre-shut-off - a universal installation system for various tap designs.